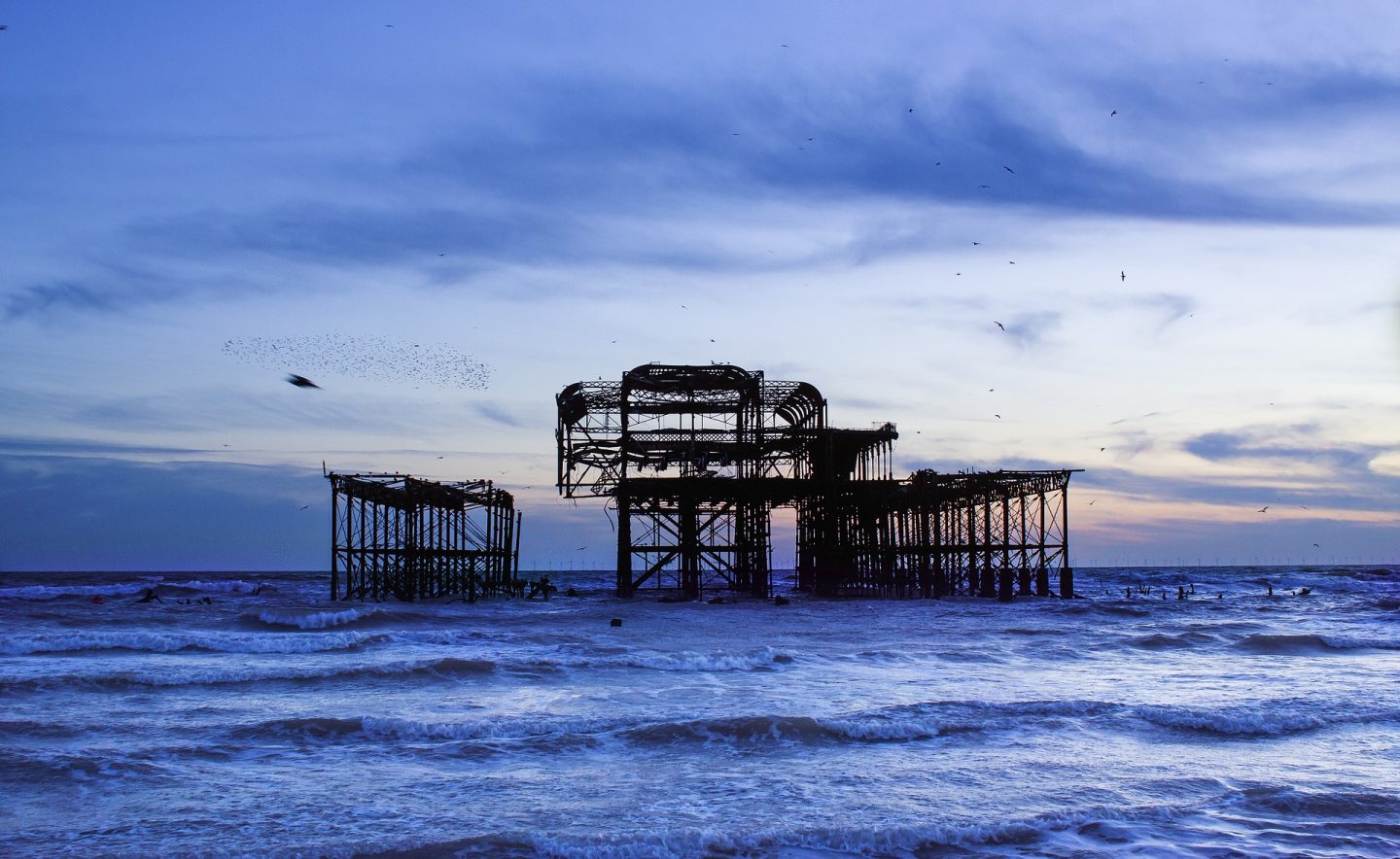 Looking for a fail-safe, definitive guide to Brighton? We have the run-down on how to make the most of your time in and around everyone’s favourite seaside town.

1.
Wander through time in Brighton’s museums
Every nature fan’s dream, the Booth Museum of Natural Historypresents a vast collection of Victorian bird taxidermy exhibited in a series of stunning dioramas (one of the first museums to pioneer ‘natural’ displays of this kind). Conversely, the Brighton Museumholds engaging historical, decorative art, film & media and archaeological exhibitions.

2.
Marvel at creative greats in art galleries & spaces
If there’s one thing that epitomises what it means to be ‘creative’ in Brighton, it’s the city’s countless independent art galleries and spaces. Stand in awe at contemporary pieces by some of Brighton’s best artists – both established and up-and-coming, at Dynamite, Fabrica, ONCA and Brighton University Art galleries, among many more.

3.
… And on the streets
Brighton has no end to the number of street art pieces adorning its buildings. Wander around the North Laine and London Road for some of the best pieces by the likes of Minty, Casette Lord and many, many more.

4.
Find endless entertainment at the Marina
Full of easy entertainment for all, Brighton Marina’s multiplex spares no occasion for boredom with its numerous eateries and amenities. Including an eight-screen Cineworld cinema, a number of chain restaurants and a Bowlplex bowling alley with on-site snack bar, party deals, pool tables and arcade machines, there’s so much to do to here keep you occupied time and time again.

5.
Get lost in the labyrinthine Lanes
Winding from Ship Street in the west to Market Street in the east, Brighton’s Lanes offer a maze of twisting alleys, curving backstreets and hidden passages lined with quaint antique and jewellery shops, designer boutiques and contemporary fashion stores – ideal for losing an afternoon in. Search for the famous Choccywoccydoodah and gaze at some of their amazing chocolate creations – all the while being serenaded by the pleasant melodies of Brighton’s buskers.

6.
Explore Brighton’s bohemian side in the North Laine
Popular with both locals and tourists alike, Brighton’s bohemian and cultural quarter is awash with street art, cafés, bars and entertainment venues – and that’s before we even start on its shopping status. Known for its vintage and handmade retailers, the North Laine is bursting with unique gems, though these are by no means limited to clothing; find forgotten literary, musical and cultural treasures of yesteryear in each of its kooky boutiques.

7.
Find your new favourite brew in a typical Brighton pub
With a plethora of local breweries across Sussex, it’s no wonder that most of them make their way to Brighton’s pubs – meaning you’ll always find a better pint than a Foster’s. Brighton’s renowned friendliness, unbeatable pub grub and the great British pint can all be found in our BN1 Magazine favourites, including Martha Gunn, Hare and Hounds, Fiddler’s Elbow and The Temple Bar.

8.
Indulge in the buzz of Brighton’s vibrant bar scene
With a number of bars dotted over the city, Brighton promises something for all tastes. For a night spent drinking sublime cocktails amid no-fuss seclusion, track down Twisted Lemon or Plotting Parlour. For great drinks served alongside a vintage backdrop, try Mesmerist or Valentino’s. Or, for pared-down drinks with Brighton’s cool crowd and brilliant background beats, head along to Sticky Mike’s Frog Bar or Dead Wax Social. Whichever you choose, you’re guaranteed a good time.

9.
Dance the night away in the city’s vibrant nightlife haunts
Having firmly established itself as the hotspot for Brighton’s underground club culture, Patterns recent club programme has seen DJs among the likes of Helena Hauff, Ross from Friends, Ben UFO and Shanti Celeste host its intimate 300 capacity ‘rave cave’. Deep in the Lanes, you can find enough live jazz, funk, latin and disco to get the entire room on their feet at the area’s best club: Casablanca’s. Or head to Pool Valley’s The Haunt for every Brightonian’s favourite Eighties’ night.

10.
Delight yourself with some of the UK’s best gastronomy
Rivalling London for some of the most imaginative culinary concoctions in the country, Brighton is a gourmet paradise for even the fussiest of foodies. Michael Bremner’s 64 Degrees and Murmur are arguably the best on the scene, however other favourites such as Artist Residence’s The Set, Indian Summer and green, anti-waste titans, Silo, are well worth a visit.

11.
Fuel your morning with Brighton’s best cafes
Hand-in-hand with Brighton’s laneway culture is an impressive assortment of independent cafes to suit Brighton’s off-the-wall philosophies. Whether you sit amongst eccentric film paraphernalia and mismatched furnishings at Marwood’s, relax in the tiny Coffee@33, or try the luxury self-roasts at Small Batch, one thing’s for sure – you’re guaranteed a damn good coffee.

12.
Catch a movie in a century-old cinema (and more)
Love film? Why not visit the oldest, continuously used cinema in the UK at the Duke of York’s Picturehouse, situated on Preston Road? Along with its sister cinema, Dukes @ Komedia, the cinema plays a variety of films, mixing cinematic classics with only the best of recent releases – recognisable thanks to its iconic Moulin Rouge-esque legs poking from its rafters.

13.
Soak up some rays on the beach
With eight miles of unbroken shingle beach lining the coast of Brighton & Hove, there’s a whole plethora of things to do on one of the country’s most celebrated seafronts. The Kings Road Arches also offer plenty of respite from the occasional rain too, with the penny arcades, restaurants and bars open all year.

14.
Unleash your adventurous side with Brighton’s watersports
With all that sea comes plenty of water-based activities, so why stop at swimming? Take the plunge and head down to Brighton Watersports or Lagoon Watersports for plenty of activities set to get your heart racing and adrenaline pumping (including wakeboarding, scuba diving, kayaking, stand-up paddle boarding and sailing).

15.
Journey the coast on the world’s first public electric railway
Opened on 4 Aug 1883 by Magnus Volk, the Volk’s Electric Railway (VER) is the oldest operating electric railway in the world, transporting visitors along its mile-long stretch from Brighton Sea Life Centre to Black Rock (close to Brighton Marina), with an intermediate station and depot at Halfway, every fifteen minutes during the summer.

16.
Unleash your inner child on the famous Brighton Pier
Grade-II listed and over a century old, Brighton Marine Palace and Pier has been entertaining visitors for generations – the theatre that once stood replaced in favour of an amusement arcade, several fairground rides and rollercoasters. With bars and restaurants scattered throughout, Brighton Pier makes for a great day out for all.

17.
Discover Brighton’s diverse music scene
With an underground music scene that could easily come out on top against those in East London and Manchester, you’d be a fool to not make the most of Brighton’s abundance of gig venues. With Green Door Store, The Hope & Ruin, Sticky Mike’s Concorde 2 running new shows and open-mics almost nightly, you’re almost guaranteed to stumble across something. You never know, you could discover the next Passenger.

Though Caroline of Brunswick and The Quadrant are long renowned for bringing excellent comedy shows to Brighton’s pubs, the most famous venue for comedy remains Gardner Street’s Komedia. Hosting its signature Krater Comedy Club and individual performances weekly, with a showcase, Comic Boom, occurring once a month, there’s no better place to get your laughs in.

19.
Escape to the country
Swing out of the concrete jungle into the Sussex countryside, with the South Downs, Devil’s Dyke and Ditchling Beacon all within easy reach. While a bus will take you to all three, why not hire a BTN BikeShare cycle and take the ride up tranquil country roads and through quaint villages. Once there, you can enjoy the gorgeous scenic landscape with a number of walking/hiking routes or, for the more adventurous, there are also opportunities for hang-gliding and paragliding.

20.
Relax in some of Brighton’s greener spaces
With green spaces such as Stanmer Park, Queen’s Park and Wild Park, the average Brightonian is spoilt for choice when it comes to journeying into the great outdoors. However, no list would be complete without a mention of the most popular space in the city: Preston Park. While its velodrome offers the perfect solution to every competitive cyclist’s problems, skaters will benefit more from The Level on Ditchling Road, with its state-of-the-art skate park.

21.
Travel to the ‘exotic other’ at the Royal Pavilion
Our very own exotic palace in the centre of Brighton, the historic Royal Pavilion Estate mixes Regency grandeur with exteriors paying homage to India and the intricate interior of 19th-century China. Formerly a royal residence, the Royal Pavilionnow serves as a major tourist destination, drawing 350,000 people annually and with an ice rinkdominating the garden every winter.

22.
Encounter the paranormal with a Brighton ghost walk
Take a chance (if you dare) on the very best of all the Brighton walks, and let the Ghost Walk of the Lanes (ghostwalkbrighton.co.uk) lead you through centuries-old taverns, narrow alleyways and the Victorian Town Hall with tales set to make every hair stand on end. The fainthearted needn’t miss out on the fun, however, with plenty of other tours covering the city, including the hop-on, hop-off open-deck bus and Brighton cycle tours.

23.
Watch the Seagulls at the AMEX Stadium
With a friendly atmosphere that encourages people of all ages, genders and sporting preferences to visit, the iconic AMEX Stadiumis accessible for all visitors, going above and beyond what is expected from a sports venue with masses of entertainment facilities for all! Whether you manage to catch our very own Brighton & Hove Albion play at home, or the U21 team for a great match from up-and-comers, you’ll surely have a good time.

24.
Enjoy a day out at Sussex County Cricket Ground
Formed in 1839 as cricket’s first First-Class County Club, Sussex County Cricket Club (or, Sussex Sharks) is the oldest club in the UK, and has played at the grounds since 1872. As one of the only grounds in the UK to sport deckchairs, everyone is guaranteed comfort while watching a match. Keep an eye out for additional events – the grounds have also played host to some of the biggest names in music history.

25.
Spend the afternoon strolling through Brighton’s markets
From food and handmade cosmetic goods to handicrafts and second-hand books – Brighton is the paramount option for finding something a little unusual in its markets. For only the best, head to Upper Gardner Street for antiques, Brighton’s Flea Market for bric-a-brac, furniture and collectables, and the historic Open Market, for over 50 of Brighton’s most talented and knowledgeable local food producers and craft creators.