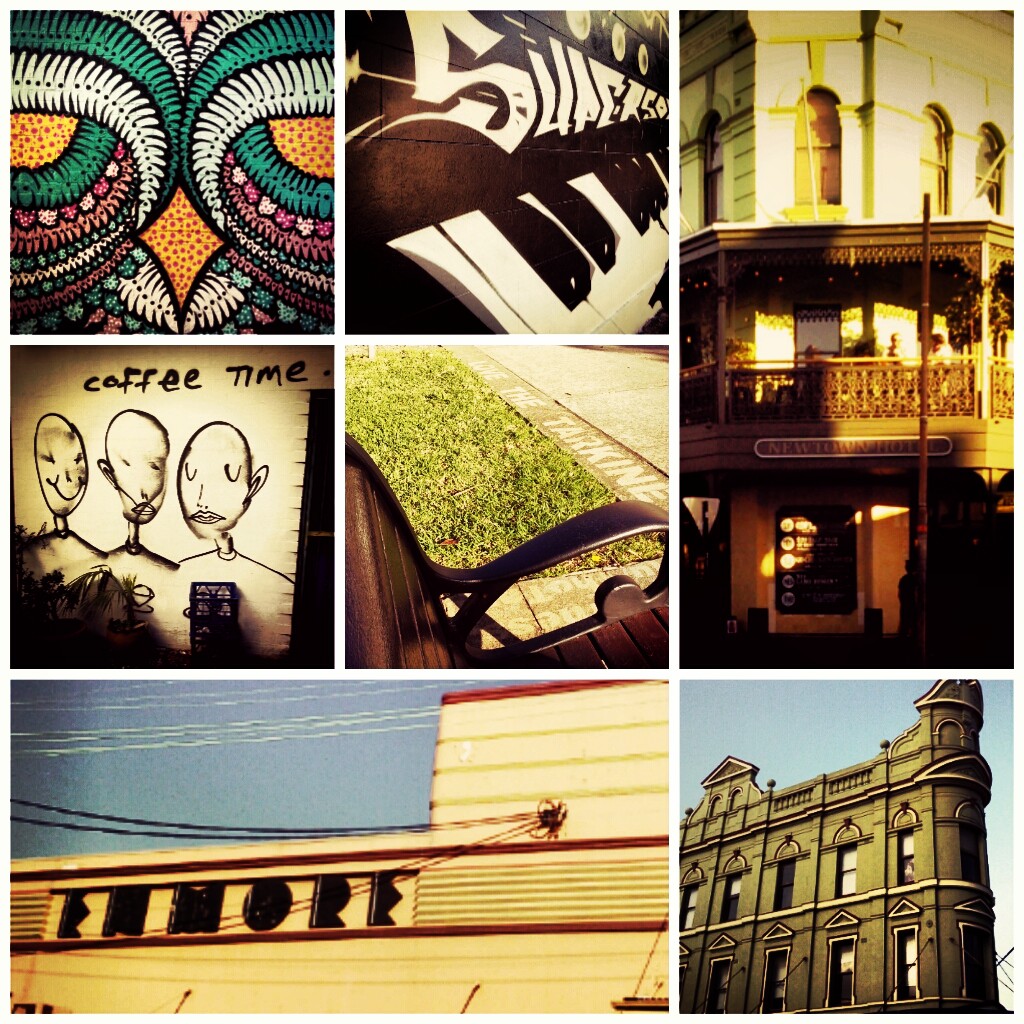 As someone hailing from – and deeply missing – the kitsch capital of the UK, Brighton, finding anything or anywhere even remotely similar to it on the other side of the world is always likely to evoke excitement (re: my reaction to just about EVERYTHING in Melbourne). Newtown is another of these places; because of this, I can’t help feeling more at home here, in this kooky suburb, than anywhere else in Sydney.

King Street’s many bars and eateries only add to Newtown’s Brighton-esque/Greenwich Village vibe, its sheer number of unusual, independent shops – within which are record paradise Hum, a vast smorgasbord of buttons in All Buttons Great and Small, and plenty of vintage clothing stores to go around – only emphasising this. With everything residing along just one or two parralel streets, though, it isn’t quite as reminiscent of the labyrinthine lanes at home as I would have hoped. However, B-town and N-town DO share a quaint resemblance which, when I get a little bit lost exploring the depths of what nearly feels like home, helps me miss my real home city a little less.

Read on for my guide to one of my favourite neighbourhoods:

ARRIVE
Train: Take the T2 Inner West & South line to Newtown station – it exits right onto King Street. Right or left from here doesn’t matter, just make sure you explore it ALL.
Bus: The 370 from Coogee to Leichardt runs through the entirety of King Street (so hop off anywhere), while the 423 runs through Newtown directly from the city.

STAY
TARA Guesthouse – on the Enmore border of Newtown – and Ardmore House are reportedly amongst the most veritably great B&Bs in the state, let alone Newtown’s neighbourhood. And, with almost everything you could ever need right on your doorstep, their locations are fantastic. Do try not to get too comfortable though, or you risk falling into the same trap as the residents here, known to be caught up in their little “Newtown Bubble”. With this being perhaps my favourite area of Sydney, I can hardly blame them, but don’t forget there’s still a whole lot of the city to explore!

VISIT
Newtown’s musical and comedy scene is twice as vibrant as its nightlife, with the Enmore Theatre showcasing some of the best names from around the globe. Fancy something a little more, er… ” Newtown”? The Newtown Social Club has just opened, for all your undiscovered indie and underground favourites.
During the day, the massive array of shops are more than worth a visit. Just do just be aware that, on weekdays, most will close early – often by 4pm – so be sure to arrive early in the day or, even better, at the weekend, where most will stay open until 5 or 6 (by which time the bars will have opened and you can hit those for some live music and a couple of craft beers).

EAT
Everywhere. King Street isn’t nicknamed “Eat Street” for nothing! Lined with many Asian restaurants (mostly Thai)the fragrant aroma of lemongrass or kaffir lime can be found with almost every footstep; my greatest advice to you would simply be just to follow your nose.
I would recommend Bean Round Town for coffee though, having struggled to find any resemblance to their delicious Nutella Hot Chocolate Mocha ANYWHERE else. I also visited The Pie Tin recently and was incredibly impressed – their Pumpkin, Feta & Silverbeet is delicious, especially when enjoyed with one of their hot caramels, a velvetty, milky drink capable of brightening up the saddest of days. They also offer many other savoury and sweet varieties, so, if you’re a fan of the humble pie, I wholeheartedly recommend you drop by here.
As for nightlife, Newtown really does have the best when it comes to choice and variety. Black Sheep and Corridor are fantastic hideaways, while The Newtown Hotel is the best all-rounder; a pub, club, bar and gastro all under one roof.

MY PICKS
Aesop, if you’ve never been there before. Sure, the luxury skin-and-haircare brand has a few stores dotted around the world, but I thought it rude to leave it off my list just for this reason. Especially given that – from greeting you at the door with mineral water, to the general smell of the store being so fresh and wonderful – you can’t help but feel a little lighter and healthier upon leaving.
As for nightlife, Corridor Food & Wine Bar have live music on Sundays, which is best accompanied by the lager & ales they serve from Young Henry’s for a great evening with friends. Speaking of Young Henry’s, their brewery just so happens to be situated just around the corner, and is such a buzzing, social place a day could easily be (well) spent there.

Newtown is the kind of place that is just like that one person you had a HUGE crush on when you were just a teenager – charming you into giddy love in seconds, and leave such a lasting impression that you can’t help it crossing your mind years later. Especially if you’re a creative type – like me – since Newtown is the place for everything, from days trawling vintage bargains, to nights catching bands in tiny bars not dissimilar to an old-fashioned speakeasy.

You’ll never be bored here, this is definitely your place to visit.

Next week sees the start of miniseries SydneyXSuburb “Best of the Rest”. With only three weeks left in Sydney, I STILL have a whole load of suburbs to cover (with the best yet to come!!), including Chippendale, Paddington, Balmain, and, the fairest of them all: Surry Hills.