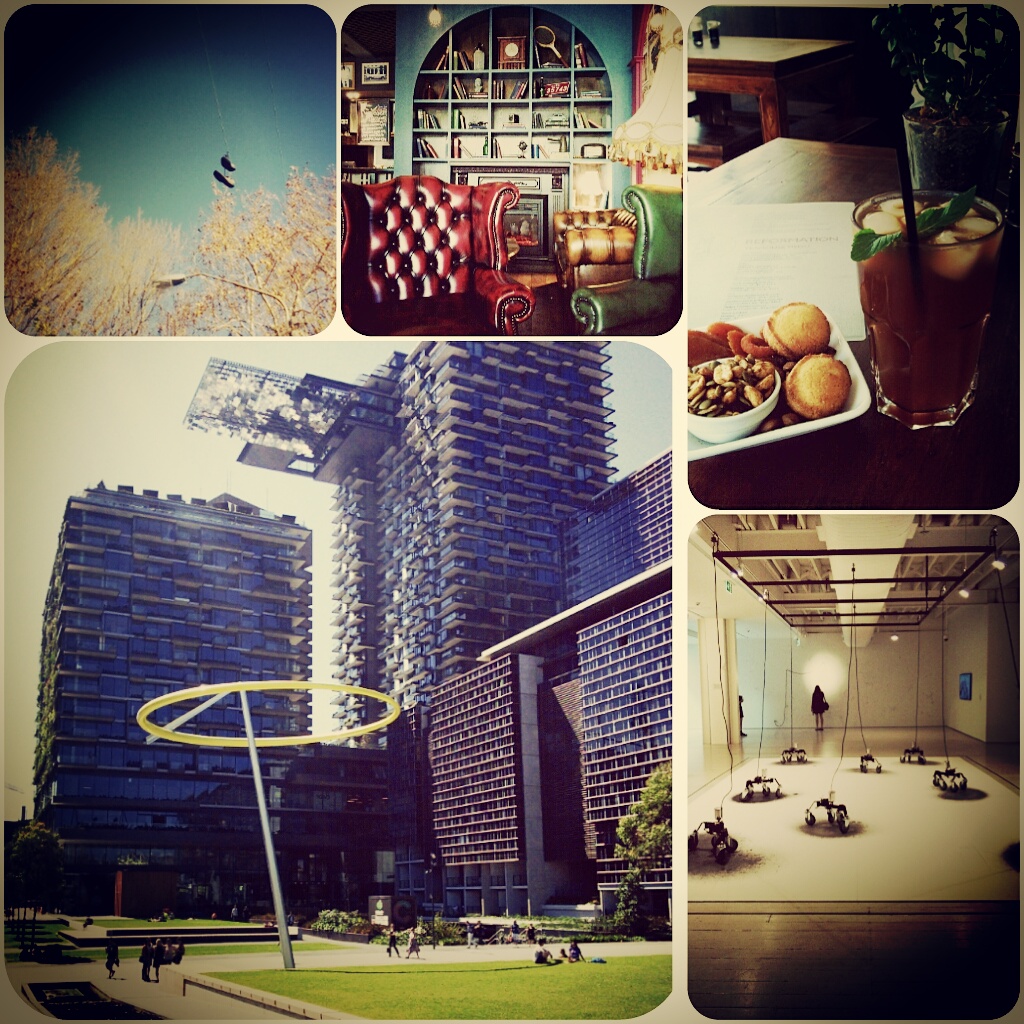 You guys may have read of my intense love of Melbourne in my homage to the city through THESE posts. Culture lines almost every street, creating a colourful and inspiring backdrop for the city’s numerous artists, yet is something that Sydney is seriously lacking (despite itself having its fair share of artists). That is, until you stumble across the glorious suburbs of Chippendale and Surry Hills. Even the architecture is distinctly Melbourne-esque, favouring old, beautifully beaten up buildings over the clones of glass towers in the CBD. Surry Hills alone manages to instill a feel of laneway coffee shop culture, while Chippendale is the place Sydney’s art scene calls home. Melbourne it ain’t, but it’s damn close.

Train: Central Station separates the two suburbs; exit through Chalmers St and you’re in Surry Hills, while the exit at Western Forecourt drops you a 5 minute walk east of Chippendale.
There’s no need for buses for these suburbs!

STAY
Bounce and Big Hostels, both situated within close proximity to Central Station – in Surry Hills – are not your standard backpackers’ inns by any means; their cleanliness and interiors even beat some of the hotels in the city, so you’re guaranteed a comfortable refreshing sleep and an invigorating shower that makes you sparkle (not dull, like most of Sydney’s other shared residences!). These two offer, hands down, the best budget accommodation in the city, there’s really no competition.

VISIT
The fairest building of them all, One at Central Park, Chippendale, is truly magnificent. Recently gaining an award declaring it the fifth best building in the WORLD (by International Contruction Data giant, Emporis), it generates all its own energy from the vertical gardens growing all the way up the side of it. This may seem no real feat to start with, but when you consider that its four-storey Living Mall is accompanied by an additional thirty storeys of apartments above it… Well, there’s really not much more I can say. Except that that’s a whole lot of energy. And you absolutely MUST visit it. Japan’s 100-yen store of kooky randomness, DAISO, graces half of the first floor alone, while there is a whole floor on level three dedicated to art, with two galleries, 10×8 and L3. Darlinghurst’s independent gallery Platform72 is also currently running a pop-up store there, and is definitely worth a visit, selling a plethora of local art from $5-5000. The aforementioned Chippendale art scene is not just limited to the One building, however. The famed White Rabbit Gallery is just across Chippendale Green, showcasing an impressive collection of Chinese contemporary art. Yes, they have a cafe. Yes, they serve Chinese tea (the iced lychee blend is the best). And yes, they have ten dollar rice dumplings, which are delicious. And no, your trip to Sydney will not be complete without it. Just around the corner is also the NG Art Gallery, complete with bar downstairs – British-inspired The Chip Off The Old Block – which is still in its early days (though hype is surrounding it fast, so get in quickly!). More galleries are dotted around this amazing suburb, and it’s wise to spend an afternoon exploring as many as you can.

EAT
Coco Cubano at the Living Mall in the One building is the most comfortable, friendly venue you may EVER step foot into. A cafe and restaurant by day, casual bar at night, this versatile Cuban-style dig is nothing short of awesome. Head there at select times on weekdays for discounts on their amazing tapas and cocktails (and don’t forget about Sangria Sundays!). But please don’t sit at table 21 – that’s my spot 😉
Wednesday to Sunday from 5-7pm marks Happy Hour at The Chip Off The Old Block, with $5 house wine and James Squire beers, making it perfect for winding down for post-work drinks. What’s more, you can get some hot chips for just an extra $3. Brilliant!
Meanwhile, Surry Hills’ vibrant centre is just full of that hipster coffee-shop culture, with blink-and-you’ll-miss-them pop-ups all over. Sample Coffee in a little hideaway of Holt Street is such a simple (yet effective!) kiosk, with tapas restaurant MoVida just down the road, but the award for best coffee arguably goes to Joe Black on Commonwealth Street. A little fussy with food? Orto Trading Co. caters for all appetites, including vegan, vegetarian and coeliac, with no detriment to flavour! The owner even serves up gourmet barbecued treats for your furry friends on Friday mornings, so that your canine’s tummy can be just as satiated as yours.

MY PICKS
Crown Street in Surry Hills may just have everything you could ever need. The Crown St Grocer is a great stop for snacks and drinks, and smells absolutely divine! Dotted along its hundred-something store fronts are enough vintage stores to kit you out in the kind of thing your Mum and Dad wore when they were “cool” in the 70s/80s, and kitsch boutiques ready to unveil your inner rockabilly. Rated #1 Restaurant in Sydney by TripAdvisor, Gelato Messina stands at number 389; with flavours including Apple Pie, Salted Caramel and an few even inspired by Game of Thrones, this is definitely not your standard ice cream shop. It’s just so much better!

So, that’s the last of my SydneyXSuburb series!

For the past few weeks, I’ve covered the CBD, Sydney Harbour, Darling Harbour, Haymarket & Chinatown, Glebe, Bondi & Eastern Coastline, Newtown, Balmain & Rozelle, King’s Cross, Darlinghurst and Paddington and, now, Chippendale and Surry Hills, using the knowledge I’ve gained in the past year through my experiences in the city, to give you the low-down on the best places to eat, drink, breathe and sleep (and everything in between!!) in Sydney. I hope you’ve all enjoyed my posts, and they find you well-prepared for your own trip to Sydney, whether it be just for a holiday or as an extended trip.

I’ve loved and hated it here, but will nevertheless miss it dearly. But, it’s time for me to start my travels home! Follow me for the latest on my adventures as I travel through Christchurch, Hawaii, San Francisco, Toronto, New York and Reykjavik before finally returning home 🙂