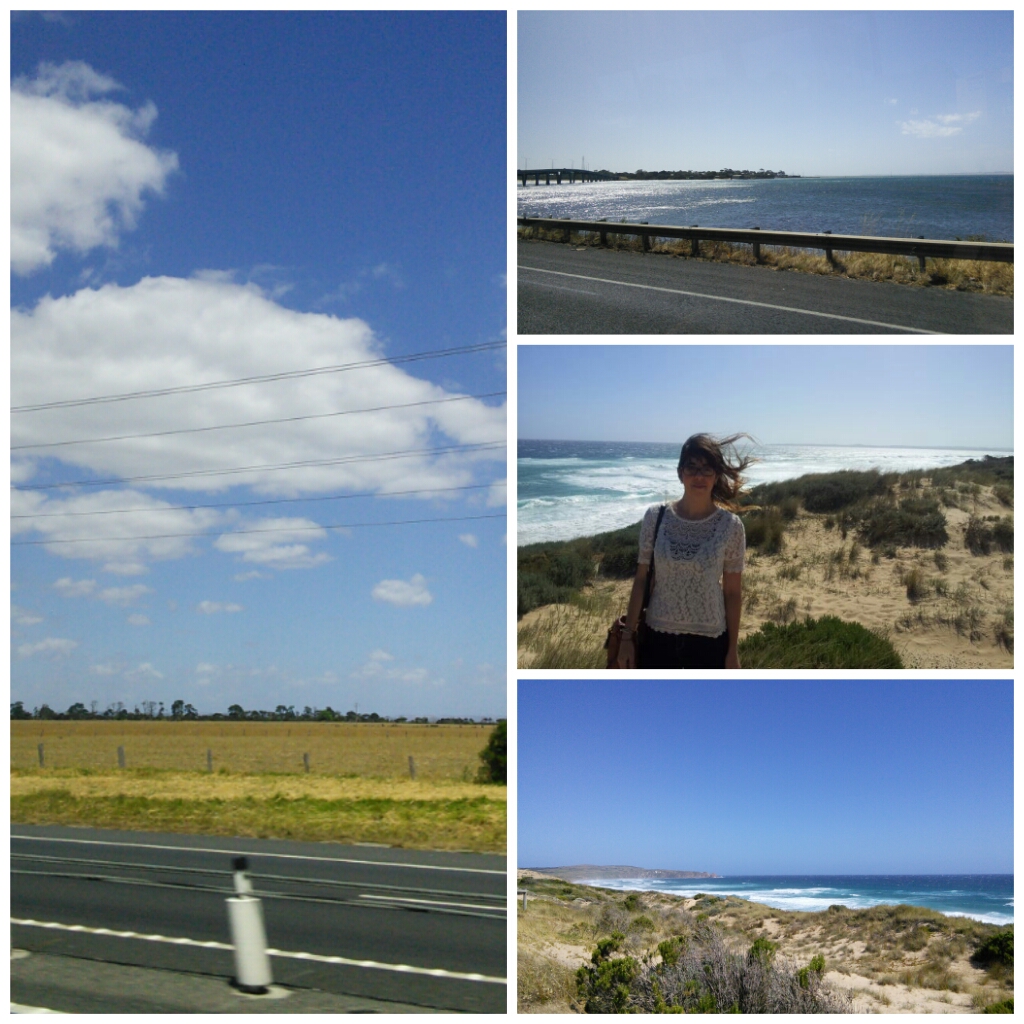 Okay, so Day Two wasn’t quite so spontaneous and whimsical (though MUCH more tourist-y!) but I DID get to see more of the beauty that Victoria has to offer (and some of the amazing Australian wildlife I had heard all about, but – bar flying foxes and one opossum – had seen none of). I’d been dying to see the world-renowned Penguin Parade at Phillip Island since I arrived in Australia, so when I found a tour* offering not only front-row seats at this magnificent experience but also a walk around the gorgeous beaches and Maru Wildlife Park (where I could get up close with some koalas and ‘roos), I couldn’t pass it up.

Being picked up from our respective hostels between 11.30 and 12.30 meant a lot of waiting around to actually head out on the road – which can be a bit of a pain as opposed to all being picked up from the same place – but meant we could see parts of the city we might otherwise have missed (the area around ‘Base’ hostel was actually the only part of St Kilda I had time to see throughout my entire trip!). The 90 minute drive to our gorgeous little lunchtime spot at Tooradin gave plenty of opportunity for meeting my fellow travellers though, in which time I got talking with two lovely radiographers from the UK and a chatty German guy. Secretly, this is my favourite part of travelling alone – I believe everybody has a good story in them and I just love to hear snippets from as many strangers as possible! After a short break for bread rolls and coffee we continued on our trip down through Maru Nature Park, where I FINALLY had the opportunity to see some famous Aussie wildlife. Sadly, it’s illegal to hold koala bears in VIC (you have to travel to Queensland for a cuddle!), but I DID get a few photos while feeding one. For two dollars, you can also feed emus, kangaroos and wallabies, and for free see dingoes and wombats too.

The bridge connecting mainland Australia to Phillip Island is so short, it makes you wonder if it can really be classed as an “island” at all. Surpassing BEAUTIFUL waters over the bridge, we were in for another treat when we finally stopped. Compared with home (amongst the pebbled ones of the UK), Australia has some fabulous beaches – the water always blue, the mass of sand golden – but Woolaima is BY FAR the best I’ve seen yet. Though the waves are a little unsuitable for swimming, the water here is crystalline, and the sand pure white. We took a walk along a kilometre stretch of the beach (a difficult task, by the end of which we were all soaked from the waves and totally windswept) before following the island round to Anzac beach and the Nobbies which, while still more beautiful than some of the Sydney beaches, didn’t quite match up to the former. By this time, it was getting late, and almost time for the main event of our day: the Penguin Parade.

Though Fairy Penguins have occupied the beaches of Phillip Island for hundreds of years, the introduction of tourism and increased human population (and therefore predators in the shape of domestic dogs and cats, as well as foxes) on the island have caused the number of colonies of these tiny feathered beauties to decrease drastically – with the number today standing alone at only one. The Phillip Island Reserve Committee of Management was formed in the Summerland Peninsula in 1984 to protect the only remaining colony, which is funded from 100% of the ticket sales of the popular Penguin Parade. Upon arrival, we were given the chance to have a look around the Conservation Centre and swot up on some Little Penguin history, before heading out onto the beach to watch the first penguins come in – scheduled for 9pm. The parade starts with the quiet “huk-hukking” of the penguins before any become visible, then it’s 50 minutes of adorable pandemonium as 600 Fairy Penguins waddle across the beach to their burrows in the sand dunes and further inland. After the first half hour, you can leave the viewing on the beach to walk up the boardwalk and see them running into their homes, which is really incredible. You’re not allowed to take photos of these tiny wonders as they come in (so as not to frighten them back into the water), but those of you who can’t visit the parade yourself can see various pictures on the website: http://www.penguins.org.au
And those of you who can make it to Phillip Island? You’ll soon learn what an absolute delight it is just to see these southern hemispheric birds. And wrap up warm! Even during the day the winds can be chilly, but at night they turn bitter and almost brutal!

We left the conservation at 10pm, returning to each of our accommodations just before midnight. For me, this meant i was left plenty of time for sleep before rising early for the BEST BREAKFAST EVER the next morning (but more on that next time!).