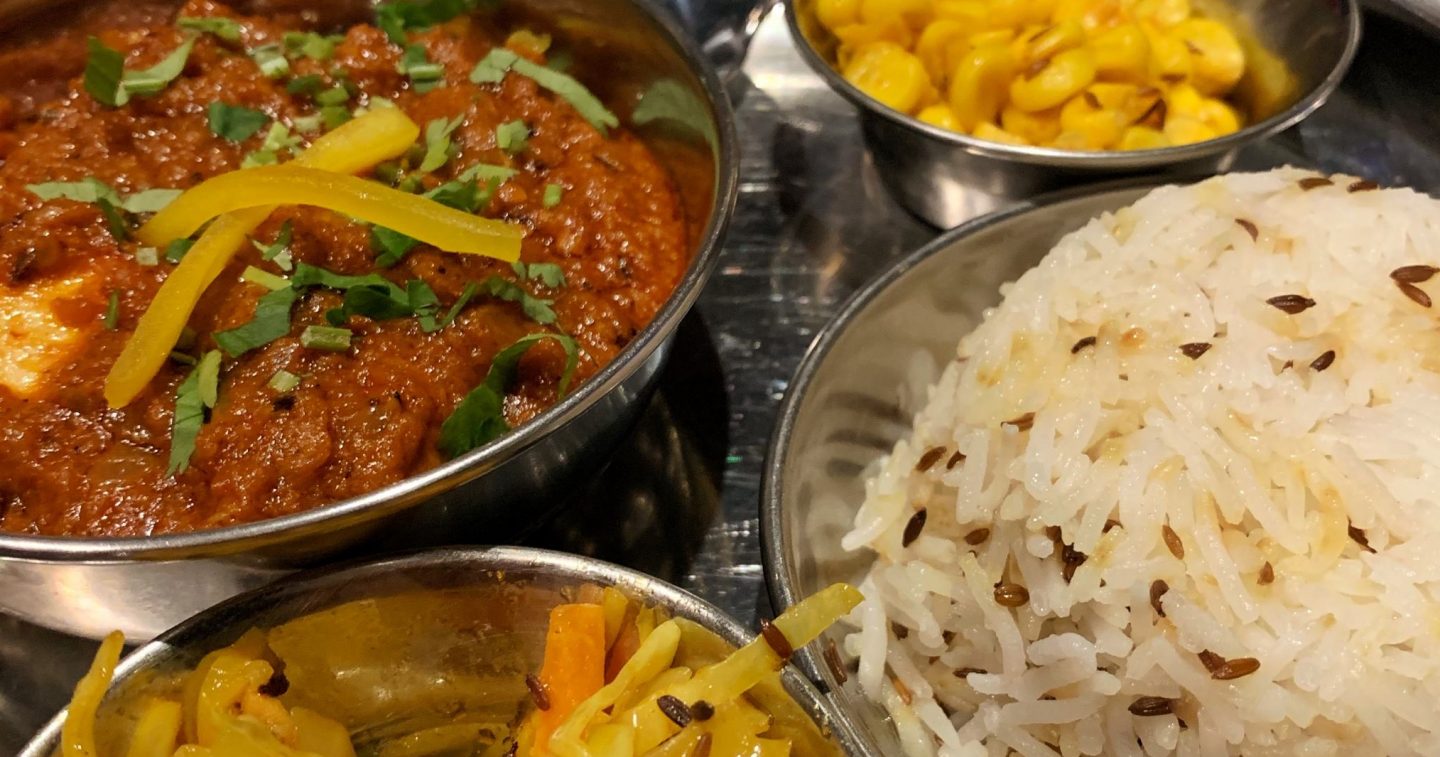 While we certainly have no shortage of Indian restaurants in Brighton, few tell a story as vividly as Manju’s – or have a main character quite as lovable. Named for its 82-year-old matriarchal figure, who curates the recipes rustled up in the kitchen by her daughter-in-law Chef Dipali, Manju’s pays homage to Gujarati cuisine through vegetarian street food made with the highest quality local produce and spices from the region itself.

We arrive early on a Tuesday evening, but the 20-cover restaurant is already full and lively – as it remains for the rest of the evening. The walls are painted a deep turquoise and are adorned with silverware depicting a lifetime of Manju’s memories, from growing up in Uganda and cooking tiffins to help her family make ends meet at 14, to being exiled in 1972 as part of dictator Idi Amin’s regime. We’re told Manju arrived in London with just £12 and two very young boys, working in a factory until she retired, and eventually realising her dream of running a restaurant aged 80.Manju’s two sons came together to buy the restaurant, and the setting is in every way dedicated to her extraordinary life. And while it may have been open now for only two years, they’re consistently booked up for six weeks at a time.

It’s not long before we find out for ourselves why. The menu is a delectable selection of some of Manju’s best family recipes (changing monthly), with each dish heralding its flavours superbly. We opt out of the papads and chutneys to make space for everything else and set to ordering, then awaiting each dish to arrive at the table as it becomes ready. The Khanda Palak Bhajia (spinach and onion bhajia, chutney, £4 for two) are the first to arrive, whetting our appetites perfectly for what’s to come.

An unusual take on a traditional Indian dish, the Samosa Chaat (samosa, chickpeas, sev, chutneys, £7) is the next to come, taking a perfectly cooked samosa and smashing it up, serving it with chutneys layered in a martini glass allowing all the flavours to be experienced at once. Admittedly I was a little sceptical upon hearing the description, however the filo of the samosa was still crunchy amid the chutneys, which added a wholesome, sweet element to the dish (if a bit of messiness).

The Pani Puri (puri, potato, chickpeas, sev, chutney, tamarind water, £5 for four) and Chilli Paneer (paneer, pepper, onion, chilli and soya sauce, £7) arrived next – the latter being described as the spiciest on the menu, however still reasonably mild to taste. Though the food at Manju’s in its entirety is authentically Gujarati, with flavours in abundance, the chilli paneer was all round our favourite dish of the evening, offering a sweetness to counteract the chilli and the creaminess of the paneer.

We were a little hesitant to order not one but two paneer dishes, however we were ultimately won over and ordered the Paneer Masala (paneer in masala sauce, jeera rice, masala corn and sambharo, £9) as one of the final dishes of the evening – our mains. We accompanied this with the Dhal Mahkani (dhal mahkani, rice, sambharo, raithu, £9), and while the paneer was notably sweeter, both were a treat.

It was around the point of our final mouthfuls that Manju herself emerged to greet the restaurant, her tiny stature present at every table, ensuring each and every diner was happy with their meals and stopping to speak to anyone and everyone who wanted a moment with her. It felt like we were in the presence of a celebrity of sorts – the otherwise bustling room fell silent in communal respect and awe for this wonderful lady. Her son Naimesh tells me she does this every evening they are open, and she has even been stopped out and about in Brighton for selfies as patrons recognise her. Her smile radiant, she turns to us and thanks us for coming. But the pleasure’s been all ours.