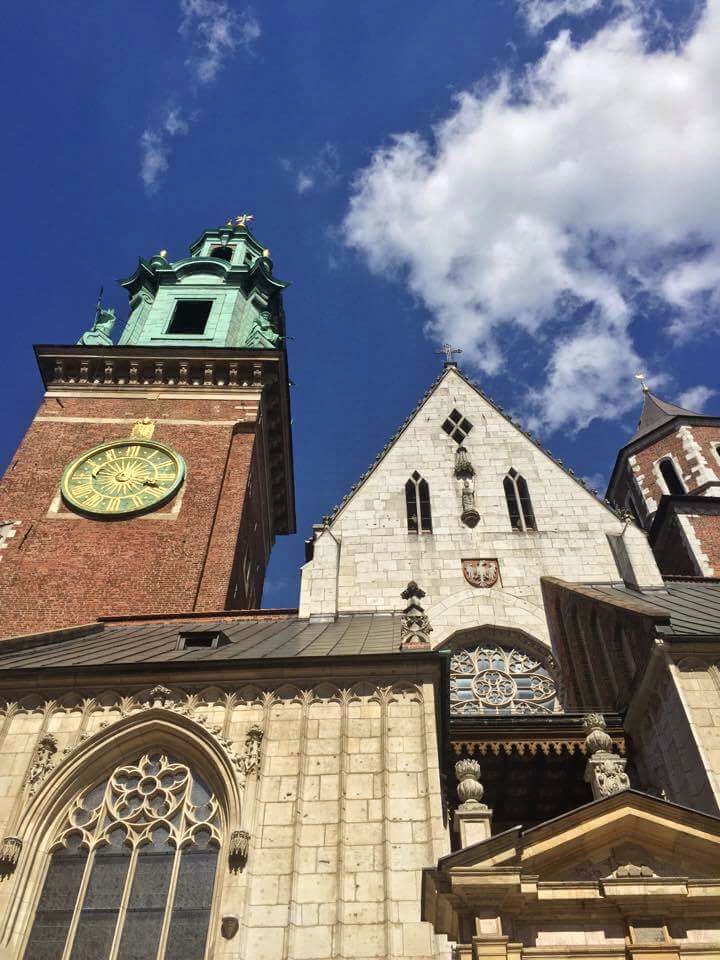 They say that Krakow was founded on the defeat of a dragon. If you don’t believe in legend, Krakow may change your mind, as it’s almost incomprehensible to understand how else such a charming place came to be.

From the second I step off the bus, I’m in love; my surroundings are beautiful, and it’s a delightful 30C outside – what’s not to like? I exit the bus station directly in the centre of the city, just a stone’s throw from the heart of Krakow – the Old Town.

With sky-skimming churches, awe inspiring basilicas and countless monuments, there’s something new at which to gape in wonder on almost every turn. Krakow’s mythical aura flows breathtakingly through the entire Old Town, with Rynek Główny (the largest market square in Europe) as its centre and the host of open air entertainment. Here, locals and tourists unite at the UNESCO World Heritage site for drinks on the verandas, people watching and – if they’re lucky – catching a live act. During my stay, I catch a trio from Italy playing Robbie Williams’ Angels, a few days after the singer himself broke down playing it in tribute to the victims of the Manchester bombings. I’m not sure whether the significance of their show was intentional; regardless, they perform the song beautifully and I give them every zloty I have on me.

Following my feet through the town, I wander by accident into the oldest university in Poland and one of the oldest surviving universities in the world, Jagiellonian University. It’s a perfect coincidence, considering my own University experience formed the inspiration this trip. On the cusp of graduating, I wanted to congratulate myself for all the hard work over the last three years in my journey to becoming a trained travel writer – and it was nice to have that little reminder.

Arguably the most historic spot in the entire country of Poland, the hilltop destination of Wawel sits just south of the Old Town, its castle the symbol of old Polish royalty. Home to Polish kings for more than 500 years, Wawel Castle is a potent symbol of Poland’s national identity, as the country’s political and cultural heart throughout the 16th century. It’s now a museum, but wandering around the castle grounds with ice cream in hand is just as fascinating – particularly on a hot day – which is exactly what I do.

If there’s one thing I notice walking the streets of Krakow, it’s how seamlessly the history and architecture blend with one another to form a city that at no stage disappoints. However, another trait I observe is a thriving café culture and excellent food scene – as exemplified at Café Bunkier, a glass-fronted terrace overlooking the Planty (park). Serving experimental fusion cuisine, the café backs on to the Bunkier Sztuki gallery, and offers – as I’m told by the waitress – an authentic experience of Krakow, as many locals like to hang out there. I order the beetroot and coconut milk soup and a cocktail of espresso and banana catchily named ‘Panama Banana’ – both are delicious. Marchewka z Groszkiem is another excellent restaurant, but that one deserves a post of its own (watch this space!!).

Easily one of the most underrated cities of Europe, Krakow is the gift that keeps on giving. Sadly, I had no time to visit Schindler’s Factory or the Jewish Quarter this time round, however will definitely be returning. I recommend a visit to anyone on the search of a destination brimming with culture and history and promise, like me, that you’ll love it.